New isn’t always better. And, who understands that better than the artisans of Deruta? Visiting the town of Deruta means immersing oneself in a centuries-old tradition, maiolica pottery. Maiolica (or Majolica), is the name given to the style of glazed, decorated pottery produced in many Italian towns, but true maiolica devotees ultimately seek out Deruta, where 250 factories continue to produce the colorful ceramic wares. 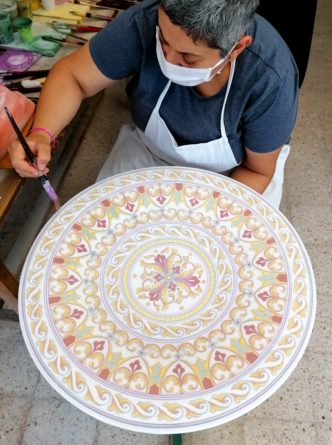 Deruta is located less than 20 kilometers from Perugia. It would probably be just another small Umbrian hill town boasting a handful of master artworks and a frescoed Romanesque-Gothic church of San Francesco if not for its reputation as ceramics central, being famous for its maiolica for over 300 years.  The industry here bloomed originally thanks to the abundance of quality local clay. 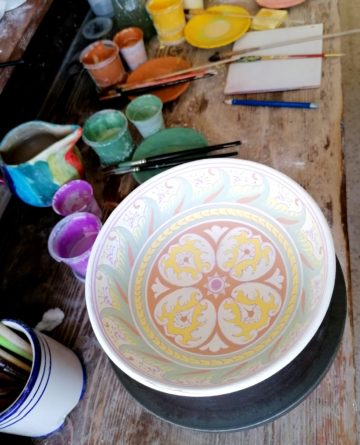 Bowl plate with glaze before firing.

Bowl plate with glaze after firing.

Our obsession with the ‘new’ drives us to travel for new experiences. Then, ironically, while were travelling we want to see the historic and traditional. Visiting the remains of Deruta’s the old pottery kilns illustrates the tale of an extraordinarily well-organized production through the times. During the Renaissance there were 52 good kilns documented in use. The antique pottery that has been found reveals innovative techniques and styles but demonstrates a respect for permanence and elements of multi-century continuity. The artisans of today still have all the technical skill, dignity, and pride of their forefathers. Firmly anchored to tradition, they are not obsessed with contemporary design but respect past techniques and timeless beauty. And maybe, that is what makes Deruta artisans so special.

We got the chance to visit one of the current producers, G&P Deruta Ceramics. In 1989 parents Graziano Pimpinelli and Prassede Gialletti founded the current powerhouse company with a simplistic logo: G&P of Gialletti and Pimpinelli. Graziano, skilled and talented painter, and Prassede, logistical genius. The company’s ambition was to produce high quality ceramics using traditional design. Today, even their contemporary works pay homage to past designs, like their peek-a-boo vases shown in the picture, which challenges the traditional route of contemporary minimalism. What distinguishes G&P from the rest of the world of maiolica ceramics is that they don’t avoid tradition but envelop it – sort of like the white vase. 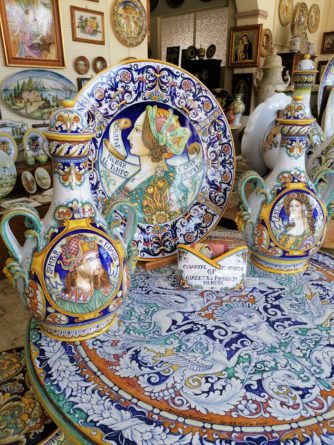 Some of G&P’s collection of their Renaissance inspired pieces.

Current heads of G&P are brother and sister, Silvia and Marco, who grew flourished in the creative atmosphere of their family home. Among clay, glazes and colors, they had the opportunity to learn the basics of the trade from their family before setting off professionally. About thirty years later, they have taken full charge of the company along with their respective partners, growing the artisan family. Marco takes care of administration and customer relations while Silvia follows her father’s footsteps, creatively involved in each phase. The growth of the company meant the growth of a highly skilled staff who want to create in line with the family’s philosophy. It is through them that ancient techniques still bear importance and that G&P are delivering classical values as a modern-day nuance.

To have little piece of tradition in your home, check out G&P’s shop online: www.gpderuta.com/en/ and contact Italy’s Best to arrange a tour to Deruta to see that detail up close.

All photos of the ceramics in this article are thanks to G&P Deruta Ceramics. 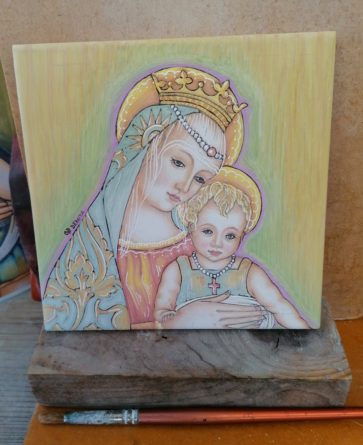 Icon with glaze before firing. 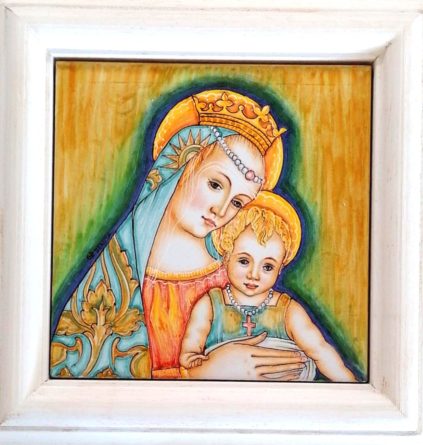 Icon with glaze after firing.

Umbria is the gentle mountainous region of central Italy. The region has been on the map for centuries whether... read more