The year 2020 has regretfully limited the chances to enjoy culture but we can revel in the knowledge that many new discoveries have been made! One of our top new favorites is the delectable discovery of a street food stand uncovered in Pompeii!

A great start to an Amalfi Coast adventure is a visit to the archaeological site that has captured the public’s imagination since its discovery in 1748. The Archeological Park of Pompeii shows the haunting remains of daily life in a Roman city that was buried under volcanic ash and rock during the 79 A.D. eruption of Mount Vesuvius. Here we have taken visitors to tour the magnificent amphitheater, stately homes, taverns and restaurants, wide avenues and ancient artefacts that give a detailed insight into life during the Pax Romana.  But now, this new discovery provides an in-depth look into one of the daily life’s most significant aspects, casual dining. 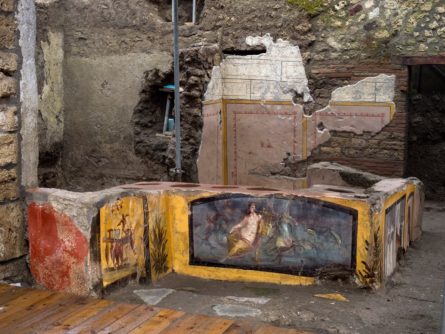 In Pompeii, excavations have never stopped even in the days of the lockdown. An almost completely intact Thermopolium (a grocery shop selling hot street food) came to light, fossilized since the day of the eruption. The earthenware pots contain food dish remains, from kid (young goat) to snails and even a sort of “paella” with fish and meat mixed together. There was also wine with broad beans ready for serving.

The large L-shaped counter is frescoed with images so colorfully and realistically detailed: a pair of mallard geese, an amazing rooster, a large dog on a leash on which someone else had unfortunately graffitied a homophobic insult.

Located in Regio V of the ancient city, it must have been a hotspot. It is on the corner between the Vicolo dei Balconi and the Casa delle Nozze d’Argento overlooking a large square, one of the most popular in Pompeii, with a beautiful marble fountain.

Apart from the food stand, the grizzly remains of a dog skeleton and two men were found nearby. Hopefully, their untimely deaths will provide insights into what happened on that fateful day.

Right now, research is just beginning but it is amazing to think that one street food stand could provide so many paths for further research. From agricultural practices, to interior and exterior design, marketing, culinary practices, viticulture, botany, domestic animal breeding, and more, so much more can be explored about the ancient lifestyles of Roman colony cities. 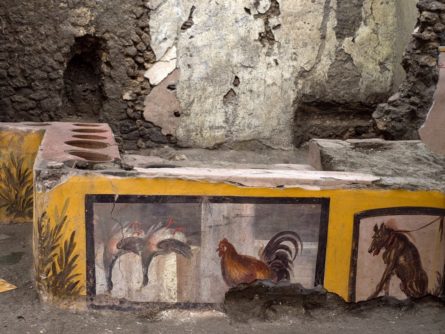 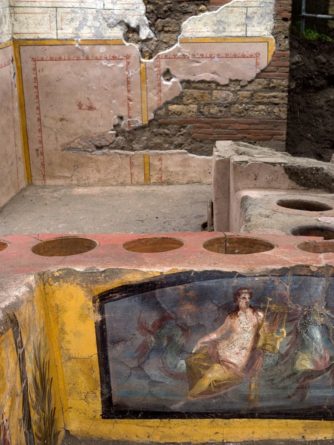 Umbria is the gentle mountainous region of central Italy. The region has been on the map for centuries whether... read more