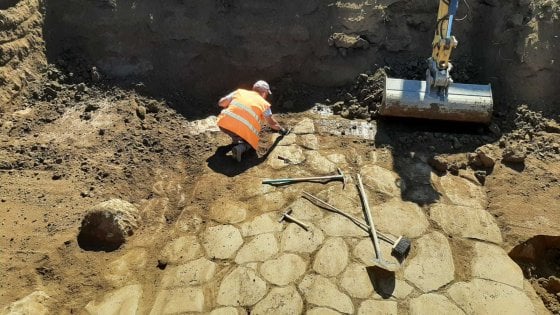 In Rome, during enlargement works on Via Tiburtina, historically valuable archaeological remains have been found. The remains are currently hypothesized to be from a large structure, made with blocks of tufa while bricks and fragments of amphorae were also identified. The foundation of the structure is estimated to date back to the II-I century BC whereas the supporting walls date back to 4th-5th AD. Although this temporarily halts further construction, full research will be conducted to gain further insights into the historical heritage of Rome.

On a slightly different note, archaeologists were able to start digging again after activity suspensions due to Covid19. Lucky for us because in northern Italy, they have uncovered an amazingly well-preserved mosaic floor that dates to ancient Rome. The floor is magnificent with vivid colors and elegant designs, pointing that the villa owner was economically comfortable. The discovery was made after nearly a century of searching the site of a long-lost villa when the first remains where found by scholars 100 years ago.

The remains belong to an ancient villa located in Negrar di Valpolicella, Italy, just north of popular Verona.  In fact, the archaeological remnants of a villa’s foundation, were found underneath a vineyard.  The archaeologists have said that they are working with the owner of the land and the town to find a suitable way for the public to visit the architectural wonder in the future.