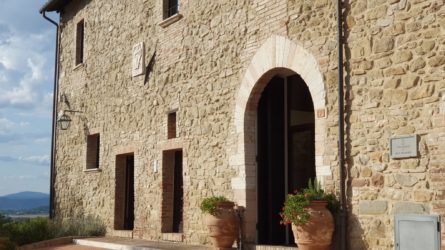 Umbria is the gentle mountainous region of central Italy. The region has been on the map for centuries whether for its chocolate in Perugia, the Franciscan monastery in Assisi or the Benedictian monastery in Norcia to the jazz rhythms of the region’s annual travelling Jazz festival or for nature lovers who love Italy’s green lung. Umbria is the sort of region that you could visit for weeks and if you plan to do so, we have two little known towns we think you should add to your itinerary before departure day, Solomeo and Mugnano. These two towns challenge our conception of preserving old beauty by welcoming the new.

The village of Solomeo has less than 500 inhabitants yet, despite its tiny size, it has become an example of Italian excellence. The origins of this small rural complex date back to the late 12th century when it was called Villa Solomei. It consisted of a palace, a casamentum, twelve domus, two casalini and the church of San Bartolomeo with subsequent additions of wall fortifications and a castle. 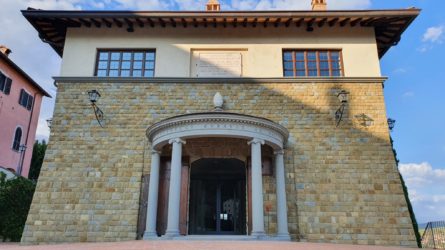 In 1985, this sleepy Umbrian town was injected with life when Italian entrepreneur, Brunello Cucinelli, patron of the textile company of the same name, saved the village from abandonment and decay. He choose Solomeo as the headquarters of his company and moreover, as a place of experiment for his neo-humanistic philosophy.

Cucinelli created a theater, built on the ruins of the ancient castle, an amphitheater for out-door performances, a gymnasium and a nymphaeum that, together, form the Forum of the Arts. Then his project restored building of the Neohumanistic Academy, similar to a house and laboratory, inspired by the Middle Ages’ brotherhoods of arts and crafts. It is essentially a training center for those who want to learn the knowledge of a “Greater Craftsmanship” together with the English language, architecture, philosophy, as well as anyone interested in courses of high humanistic culture. 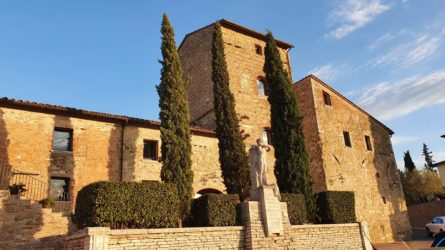 On the opposite side of the Theater, an integral part of the Forum of the Arts is the Garden of the Philosophers (where concerts and events are held), consisting of a complex of terraces sloping down towards the hills, where knowledge lovers meet for discussions or to remain in solitude and meditate.

The Cucinelli project has grown over the years and more recently, added a new dimension to the project dedicated to green regeneration of the surrounding landscape. In 2014, by the Brunello and Federica Cucinelli Foundation, the “Project for Beauty” was presented in Milan, through which three immense parks were created in the valley at the foot of the Borgo di Solomeo: the Agricultural Park, the Oratory Park Laico and the Industrial Park. The parks reclaimed land that was  occupied by old disused factories and gave space to new trees, meadows and orchards.

This is Solomeo’s case of “neo-humanistic capitalism” which earned the Umbrian entrepreneur many national and international awards and which, make the reality of this village a case of modern economy, studied by prestigious universities. The village of Solomeo, in fact, has been completely restored thanks to the economy of beauty. Cucinelli valued what existed, mixing the art and craftsmanship of the past with today’s push forward, harmonizing the two. 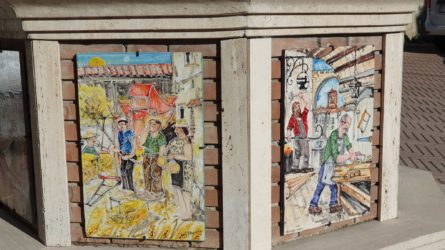 Near enough to Perugia and south of Lake Trasimeno, appears Mugnano, among rolling hills, vineyards and olive groves and centuries-old holm oak forests. The Borgo, the ancient historical center, has typical small-town Italian beauty made up of small streets, piazzas with ancient wells and a castle whose walls protect the first and oldest entrance known as the Fratente.

What makes Mugnano so particular today is the breath of contemporary art which, thanks to a meticulous renovation, has transformed the town since 1983 through street murals. The idea, “I Muri Dipinti,” was by the painter, Benito Biselli, who wanted to integrate the old existing walls in modern expression. Italian and foreign painters came and performed their free-themed works on the facades of the old houses.

The originality of the mural paintings, the themes, the styles and the techniques showcase the diversity ​​of art: going from the figurative, to the graphic and to the informal. The inhabitants of Mugnano deeply appreciate the art and treat the murals as neighbors, who live and observe the town in their own right. The life of Mugnano is told in the alleys, through the paintings, translating the imagination of anyone walking through.

In light of the creative energy of Mugnano, the town also hosts, for the whole month of December, theatrical performances, band concerts and Christmas events such as the Living Nativity, in which the historical re-enactment in the medieval village of the Nativity comes to life. 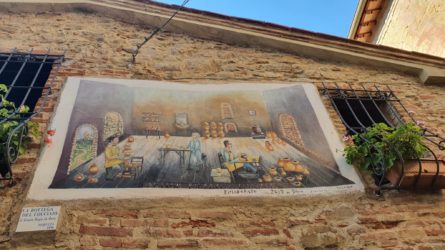 These two incredibly artistic towns challenge our contemporary notion of community: who are they for? What do they need? And how are their stories being told?

For tours and more information on Umbria, contact Italy’s Best.