Bella Matera: what you need to know

Bella Matera: what you need to know

Matera advertises itself as an open air museum, it is this and more. It is  a Unesco World Heritage site and 2019 European Capital of Culture, and dates back to 9,000 years ago.

Matera was first put on the tourism map, because it was chosen by Mel Gibson to provide the backdrop for his movie “The Passion of the Christ”. This choice doesn’t surprise us: the time passes but some things don’t change: Matera has a charming aspect, it leaves its visitors speechless. The fact that this city maintains unspoiled its history and its appearance from 2000 years means that people who settled in this beautiful place succeeded in a harmonious integration, without the necessity to violate the territory.

Matera is the city of the “sassi”, of the rupestrian churches and of the natural areas that preserves an unique habitat.  The “Sassi” (literally: “stones”) are probably the first thing you think about when we talk about Matera. These are in the centro storico of the city, and in a particular tangle of alleys, churches and ancient houses, these quarters cherish the traces of the past and of the events that took place in this city. We know that every age of the human history had its housing, and here in Matera it is possible to retrace this evolution. Moreover this city testify how men can exploit nature without damage it. Today Matera’s sassi are in the Unesco’s World Heritage List, as “cultural site”.

This year’s balloon festival is ready to take flight!

The event will be attended by twenty air balloons crews coming from all over Europe which marks it the first international balloon festival of the ‘City of Stones’. Revellers who visit Matera during this time can head to Matera’s Murgia Park where local citizens and foreign tourists can scan the skies for the rainbow of hot-air balloons gliding through the air and cross the Lucanian city, an ‘open air museum’ featured by suggestive crèche made of caves, built-tuff abodes and rocky churches. It will quite the incredible sight. Built into the hills and ravines (known as “Sassi of Matera”) made of soft tufa stone – where families lived along with their farm animals, Matera was the dramatic location for Pier Paolo Pasolini’s “The Gospel According to St. Matthew” and Mel Gibson’s “The Passion of the Christ” – both film directors chose the rocky city for the shoot as walking along the streets instantly transports you back two millennia ago. 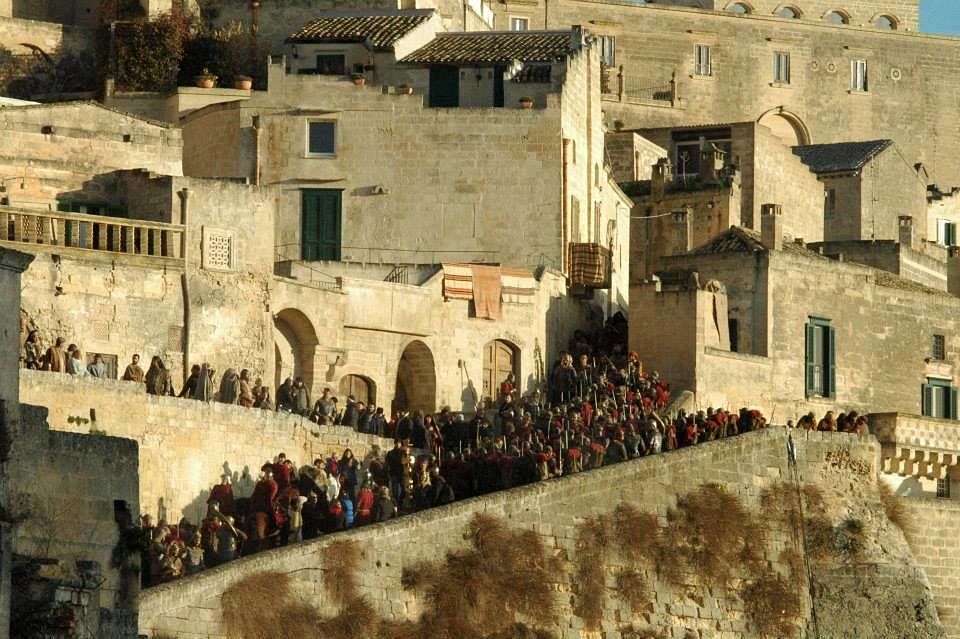 We can’t wait for 2016 to watch the new Ben Hur movie with Morgan Freeman, that just wrapped up filming in Rome, made by MGM, Paramount and Timur Bekmambetov.

The Women’s Fiction Festival is the only European Festival dedicated to female fiction writers. This programme includes an international conference for writers; master class led by best seller writers; round table among writers, editors and literary agents; meeting with the public; happy hour, concerts and literary prize-giving.

For those who consider fiction a hobby or for those who want to become professional writers, WFF organizes workshops about the publishing procedures as well as literary translations and editing.

The International Writers’ Conference various literary genres, from thrillers, to fantasy and urban fiction..
The participants come from USA, Germany, England, Austria, Sweden, Italy get together to meet literary agents and editors from the most important international publishing houses.

For readers and literature lovers the Women’s Fiction Festival organizes meeting and discussions with famous writers and VIPs every afternoon, followed by concerts, fun and informal meetings with the participation of people coming from all over the world.

Matera will be the European Capital of Culture in 2019

With this in mind, we think it’s time to seize the day and have Italy’s Best arrange your tailor made trip to Matera.