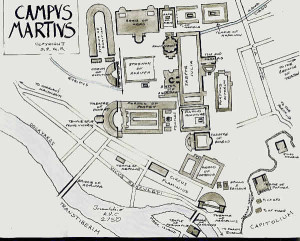 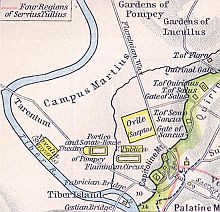 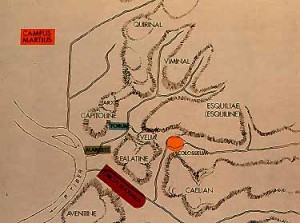 Campo Marzio is the ancient Roman district dedicated to Mars, the god of war, and boasts some of the most famous monuments in the world.

Being outside the official ancient city boundaries, it came to be considered as a kind of neutral ground, where foreign ambassadors were received and temples dedicated to oriental divinities were also built there.

Many of the original buildings and monuments built in the district 2000 years ago, are still standing today, whilst many beautiful monuments were built later during the Baroque era. 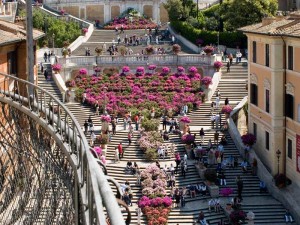 When buying your beautiful Italian shoes at the Spanish steps bustling shopping district, you wouldn’t believe that moments from where you are standing, and metres beneath your feet, was where the Roman military met to exercise and train for battle.

Via del Babuino connects Piazza del Popolo to Piazza di Spagna, forming the Trident, district, within the Campo Marzio boundaries. Via Condotti, The Spanish Steps, Audrey Hepburn, Roman Holiday and 1950’s decadence and movies, is what this area is known best for.

What did the Romans build at Campo Marzio?

After the great fire of Rome in 80 AD, Emperor Domitian rebuilt all the monuments and created one of the most impressive works of Rome: the Circus of Domitian, on top of which the Piazza Navona was later to emerge.

This exciting stadium is being restored today, and would be a must on any Roman tour itinerary.

The Emperor Hadrian built a temple in this area, whilst multi tasking and improving the Pantheon, also in the area. Today, Hadrian’s Temple is used for fashion shows during Rome Fashion Week, and many exciting exhibitions and events.

And finally, two columns, that were inspired by the Emperor Trajan’s column, were erected.

One of which, was dedicated to Antonino and Antonina Pio by Marcus Aurelius and can still be found at its original position in Piazza Colonna, in front of the Palazzo Chigi

Way back when, before the Emperors, Tarquinius, Rome’s last king, turned the area into an enormous wheat field.

According to legend, during the revolt that ultimately overthrew the king, sheaves of grain were thrown into the Tiber, creating the Tiber Island.

Because it was close to both the river and St. Peter’s Basilica, the district became a pilgrimage centre during the Middle Ages.

During the era of Papal Rome, this area underwent several changes, especially to the roadways, including the creation of Via del Corso, Ponte Sisto, roads which today run along the edge of the Tiber, and Via del Babuini, one of the three streets forming the trident that begins in the Piazza del Popolo.

This bite sized brief about Campo Marzio might take three minutes to read, with an Italian espresso, but would make a brilliant day tour, with the map of Campo Marzio and an Italy’s Best tour guide to tell you all the secrets along the way, and great restaurants of course.