What are the best doors of Rome?

One of the best things about Rome is that there is such an absolute abundance of history, that even living here for decades, you can still discover new things.

Here are some of our favourite few. 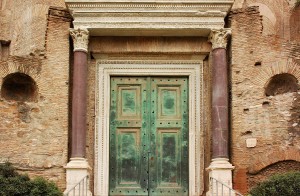 The Temple of Divus Romulus, which was built by the Emperor Maxentius. It was dedicated to his son, who died, in 309 AD and like most buildings that are still standing or partially standing today, was converted to a Christian church in the middle ages. It’s one of the most unusual temple structures. Most temples share a similar shape, but this one consists of a small central round structure with 2 side niches. Originally, it had a rounded front facade with areas for statues. Today, the central rotunda remains, as does the original bronze door and columns. The columns are unique, made of beautiful purple porphyry. 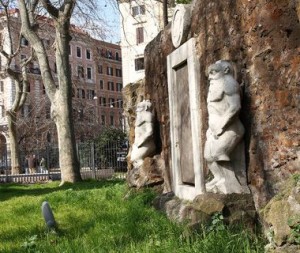 The Porta Alchemica (Alchemical Door), also known as the Magic Portal, is a monument built between 1678 and 1680 by the Marquis Massimiliano Palombara, in his residence, the Villa Palombara. It is located on the Esquilino hill, near Piazza Vittorio, in Rome. This is the only one of five former gates of the villa that remains, there was a lost door on the opposite side dating them to 1680 and four other lost inscriptions on the walls of the mansion inside the villa.

A peek-a-boo view through the keyhole on the gate of the Villa del Priorato di Malta, one of the many properties owned by the Knights of Malta on Rome’s Aventine Hill.

Behind this beautiful gate is a tree lined path with a view of Michelangelo’s Dome of St. Peter’s Basilica, perfectly framed by the ivy of the garden on the other side of the door. Walk up the hill from circus maximus, past the rose garden, and you will have arrived at your destination.

Through this keyhole, you will see a piazza designed by Piranesi in 1765.

We couldn’t write about the doors of Rome, without mentioning the most beautiful building in the Eternal city, that is, of course, the Pantheon.

Stay tuned to Italy’s Best blog, for more about the Pantheon, coming soon.