Through the keyhole: Secret Rome

Through the keyhole: Secret Rome 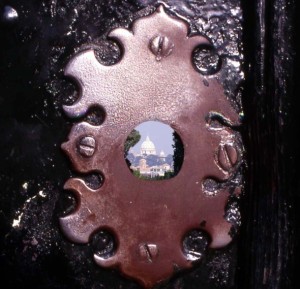 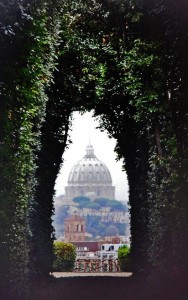 Just when you thought Rome couldn’t get any more beautiful, think again.

Through a special, secret keyhole awaits the most breath taking boulevard, dotted with trees that frame the view of Michelangelo’s Dome of the Vatican City.

Walking up to this beautiful door, is one of the best ways to breathe in a bit of fresh, green air, and enjoy a momento of tranquillity, away from the maze below.

Piazza of the Knights of Malta

The south west corner of the Aventino, a stones throw from the Mouth of Truth, and a minutes walk from the Circus Maximus, the Piazza of the Knights of Malta (Piazza dei Cavalieri di Malta) was designed in 1765 by the Italian architect Giovanni Battista Piranesi.

Who are The Knights of Malta

The Knights of Malta is a religious organization that provides humanitarian and medical assistance worldwide. It has held Permanent Observer status at the United Nations (as does the Red Cross) since 1994, and issues passports to its diplomats for diplomatic business. It lacks territory, a permanent population, police power, and has no economy.

They were originally founded in the late 11th century, after establishing a hospital in Jerusalem to care for ill pilgrims during the First Crusade. The organization expanded and built additional hospitals along the route from Europe to the Holy Land.

There are fifty national Knights of Malta organizations and thousands of members (called ‘knights’) worldwide. The United States maintains an association as does Canada and the United Kingdom.

The keyhole lets you look through three different countries.

Rome, The Sovereign Military Order of Malta (which owns the building that the keyhole belongs to andwas once an independent country) and the Vatican City.

A bit about the Aventino Hill

The Aventino is named after the hill which rises up near the Tiber river and is one of the legendary seven hills of Rome. Diagonally opposite at the end of Circus Maximus is the Celian Hill, another of the seven hills. Testaccio is an area to the south west of the Aventino, along the bank of the Tiber and is named for the eighth hill of Rome, a man made hill that was built from discarded pot amphoras (testae) in Roman times.

There is the beautiful Rose garden three minutes away from this bellissima spot.