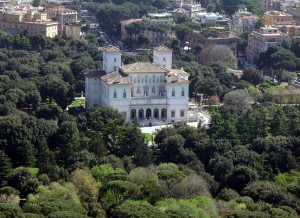 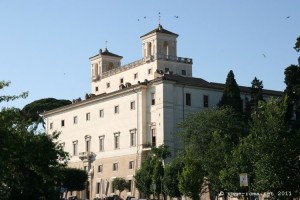 The Villa Medici, whose mini belvedere offers a 360-degree panorama of the Eternal City, a mere stones throw from the Spanish steps, was one of the most elegant and worldly settings in Rome.

The Villa Medici gardens, like the villa Borghese that adjoins them, were far more accessible than the formal palaces such as Palazzo Farnese, in the heart of the city.

The Villa Medici is situated on Pincio Hill. This hill does not belong to the seven major Roman hills, because it is outside the pomoerium, the sacred wall of antique Rome. However it does belong to the perimeter of the Aurelian walls built between 270 and 273 A.D. The Villa stands where the gardens of Lucius Lucinius Lucullus were. He was a Roman general and favourite of Sylla. Between 66 and 63 B.C. he built a major villa that covered the entire area between via Salaria Vetus and the current northern path of Pincio, whose villa and was to become a model for other gardens in the city and later be recognized as one of the first attempts in the West to tame nature through landscape gardening.

In 1803, Napoleon Bonaparte moved the French Academy in Rome to the Villa Medici with the intention of preserving an institution once threatened by the French Revolution. At first, the villa and its gardens were in a sad state, and they had to be renovated in order to house the winners of the Prix de Rome, which meant that many French artists were given the opportunity to copy the masterpieces of the Renaissance, with artist Montigny taking over the renovation.

When the male line of the Medici died out in 1737, the villa passed to the House of Lorraine and, briefly in Napoleonic times, to the Kingdom of Etruria.

The villa adds to Rome’s architectural grandeur that is evident on the turn of every corner in the Eternal city, with a beautiful fountain in the front of the building, which is formed from a red granite vase from ancient Rome.There are beautiful, refined copies of antique statues, Giambologna’s Mercury, the contemporary sculptures and the symbols linked to the Medici’s history.

The view from the Villa looking over the fountain towards St Peter’s in the distance has been much painted, but the trees in the foreground have now obscured the view.

The Villa Medici is definitely a Rome must.