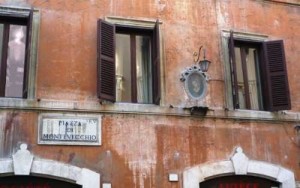 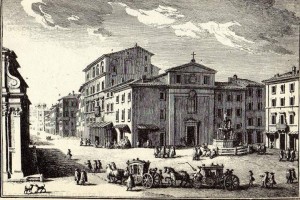 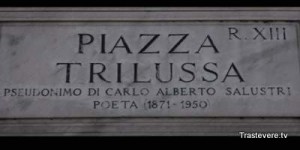 What are the best ‘mini squares’ of Rome?

Whilst the bigger more famous, Bernini made squares will be in your Rome guide books, the mini square,whilst they may not be as touristy, do offer magnificent ‘madonelle’, churches and wine bars to tempt you with.  A mix of off the beaten track and on the main drag, blink and you’ll miss them, here is a list of brilliant mini squares in Rome.

The epitomy of Rome’s beauty.One minute it’s a romantic meeting spot, the next it’s bustling with cappuccino wielding waiters, and buddies meeting for a bottle of red at 6pm. Monica Bellucci has an apartment there. Michelangelo used to drink at Bar del Pace, beside Santa Maria della Pace, the church dedicated to the Blessed Virgin Mary.

Santa Maria della Pace is built in place of what was, in the Middle Ages, the church of the aquarellari, the water-salesmen, who provided casks of water from the Tiber to parts of Rome that had no direct water supply. The present church, designed by Baccio Pontelli and Cortona, was commissioned by Pope Sixtus IV, in 1482, after he had made a vow to build a new church here if peace was restored between the Papal States and Florence, Milan and Naples. The belief is that the site was picked because a drunken soldier had stabbed a statue of the Madonna in the breast, and it started bleeding.

This church has a lot to much to offer including: Bramante’s Cloister, a coffee bar with wifi inside, as well as a bookshop.

Where: Behind Piazza Navona

Two thousand years ago Monti was a red light district, today it is chocolate box picturesque Rome at it’s best, where children kick a ball, whilst the beautiful wave at waiters to bring them more Montepulciano. A bustling district with boutiques and weekend markets, Monti remained a disreputable backwater until Rome became the capital of a united Italy in 1871.

At 41 Via della Madonna dei Monti, the church of the same name was commissioned by Pope Gregory XIII in 1580 to celebrate the discovery of a miraculous 15th-century image of Our Lady with Saints Lawrence and Stephen. The fountain by Giacomo Della Porta, the Fountain of the Catechumen, is fed by Aqueduct Felice which was promoted by Pope Sixtus V Peretti (1585-1590) and bears the emblem of the pontiff and the coats of arms of the City.

Blink and you’ll miss it: Bellissimo backstreets like Via del Boschetto behind the square, are where it’s at.

Where: A stones throw from Bernini’s tomb at Basilica of Santa Maria Maggiore, just off via Cavour.

What’s behind closed doors would be the motto, if this mini square were to have one.
At number 5, Teatro Arciliuto, is a twee basement theatre with monthly shows in English put on by The English Theatre of Rome. The theatre boasts Raphael frescoes, and an instrument collection spanning centuries. Housed in the 15th century Palazzo Chiovenda, every night, in the bar’s atmospheric longue, poetry and music from the last 1000 years are recited in 7 languages.

Around the corner from this little square, is Via dei Coronari, or “Crown makers street”, where crowns of flowers were made between the 16-19th century. Today it is rather the iconic street of antique art dealers.

Blink and you’ll miss it: Madonella above the wine bar, at number 17.
Where: In between Castle of Angels and Piazza Navona

Blink and you’ll miss it: A romantic mini piazza tucked behind the back streets. A meeting place for locals who gather at Bar del Fico, to enjoy a wine over a game of cards, or two.

Trastevere is the 13th rione of Rome, on the west bank of the Tiber, south of the Vatican City. It’ s name comes from the Latin trans Tiberim, meaning literally ‘beyond the Tiber’.
Piazza Trilussa, the hip meeting point of the medieval district, may not be a secret square, but it is often overlooked. Trilussa is named after the poet, best known for his poems, written in the dialect of Rome. It would be virtually a crime, not to cross the Ponte Sisto and enjoy the spectacular view of the bridges over the Tiber, with the reflection of the city lights sparkling in the it’s waters.
The marble and travertine Fountain built in 1613 by Jan van Santen and Giovanni Fontana, commissioned by Pope Paul V Borghese (1605-1620), which is powered by a branch of the aqueduct Trajan-Paul, built for the transtiberina.
Blink and you’ll miss it: The Madonna with Baby Jesus ‘madonella’
Where: Trastevere

Buildings from back in the day, totally out of tourists way.
Blink and you’ll miss it: Magical, medieval, Trastevere. This old merchants square’s charm is in the detail. Wagon wheels, terracotta pots, candle light trattoria magic.
Ristorante: Taverna dei Mercanti at number 3a. If you want a theatrical meal, this is where it’s at. The restaurant across from this puts on a three minute Italian drama every night, so you are in the best seats. Why not book a table and discover more.

The Borromini eqsue Baroque gem of of a church, Saint Mary Magdalen is less than a minutes walk from the Pantheon, in the Campo Marzioarea of historic Rome. A more intimate church than it’s more magnificent neighbours, it was completed in 1699 by the Order of the Saint Camillus de Lellis.
Blink and you’ll miss it: A marble plaque on the Palazzo Mazzetti to show where the Tiber flooding level was in 1870 as well as the Mazzetti family coat of arms above the windows.
Where: Thirty seconds walk behind the Pantheon. ‘It’s behind you’.

Book a Walking Tour of Rome with Italy’s Best.