Minerva, Rome’s multi tasking deity, was the Roman goddess of wisdom, war and medicine. Not to mention, weaving, crafts and magic.

She is depicted with an owl, for wisdom and a shield, to represent her status as warrior goddess and is the Roman version of the Greek goddess Athena. Like Athena, Minerva was born from the head of her father, Jupiter (Greek Zeus)

Minerva is the protagonist in one of the most famous stories presented in Ovid’s Metamorphoses. In the myth, a Lydian girl named Arachne unwisely boasts that her weaving skills are even better than Minerva’s. Minerva, being the goddess of weaving, decides that the two would be best to battle it out in a weaving competition. Minerva wins.

Where does the name Minerva derive from?

Stemming from an Italic moon goddess Meneswa, the Etruscans adopted the inherited Old Latin name, thereby calling her Menvra. It is assumed that her Roman name, Minerva, is based on this Etruscan mythology.

Minerva was worshipped in Rome, there were two main shrines for her on two of the seven hills in Rome. One being the Aventine Hill, where a shrine was built in her name, in either 263 or 262 BCE, and the other being a shrine on the Celio hill.

Minerva grew in stature within the most important of all of Rome’s temple, the Pantheon, where Minerva took over as the most important focus of the Quinquatrus festival, previously the domain of Mars, the God of War. The five-day festival began on the 19th of March, and marked the beginning of the campaign season for the Roman army, also claimed the goddess was his special protectress and he commissioned a temple to her in the Nerva Forum in Rome in the second half of the 1st century CE.

Where can we see examples of Minerva in Rome today? 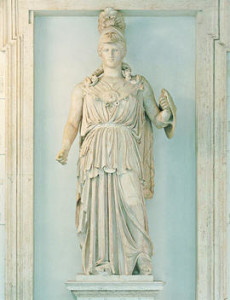 One of the most impressive representations of Minerva in art is the 3 metre high statue of the goddess which now resides in the Capitoline Museums in Rome. Dating to the 2nd century BCE, the standing figure wears a chiton and belt, an aegis with Medusa, carries a shield on her left arm and wears a Corinthian helmet pushed to the back of the head. Minerva is represented as a fearless warrior.

Mosaic of Minerva (from Tusculum, a town in the hills outside of Rome), Vatican Museums, Rome 3rd Century BC. M inerva 2nd C BC Roman mosaic VM

Rome’s beautiful basilica, Santa Maria Sopra Minerva, translates as Mary above Minerva. That’s right, you guessed it. There is an ancient Roman temple of Minerva, which today’s church is built on top of. The church is located in the Piazza della Minerva, one block behind the Pantheon, within the ancient district known as the Campus Martius. 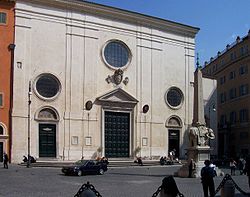 On your next trip to Rome, these three Minerva sites are a must.