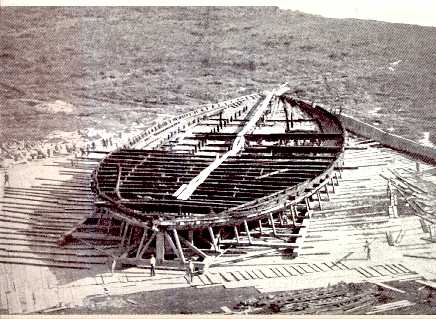 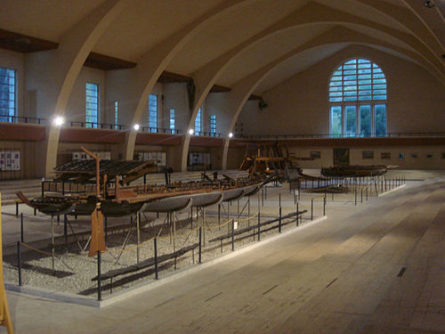 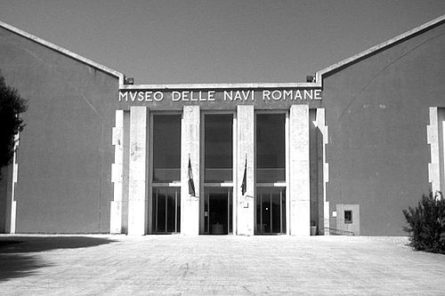 In April this year, the search was on for the possible long lost remains of a majestic barge used by Emperor Caligula at Lake Nemi as a pleasure boat, built on his orders 2000 years ago. An expedition was mounted to track down the boat after reports by local fisherman that their nets kept getting snagged in the water and they suspected the long lost barge was the reason why.

It is not the first time the lake has been searched, Mussolini had drained the lake in 1928 and 1932 and discovered two previous boats owned by Caligula. An underground tunnel built by the Romans connects the lake to surrounding farmlands, and was used to dredge the lake earlier in the century draining off water, when treasures were previously found. A third boat is believed to also still be at the bottom of the lake. In the 1930’s the boats recovered were kept in a Museum at Nemi, which was later destroyed during 1944 by German fighting forces in WW2, leaving charred remains and odd bronze figures all that remained. In the 1950’s model replicas of the ships were added to the Museum, still on show today.

What is known is that all three were floating palaces, equipped with heating and plumbing systems, mosaic floors, luxuriously adorned in marble and gold, and with sails made of purple silk. They were most likely used for wild parties and entertaining guests. Though could also have been constructed to honour the Goddess Diana, who’s temple is on the northern shore of the volcanic lake.

The Paramilitary Carabinieri specialist divers from the Civil Protection Agency, who are usually called upon during earthquake disasters and serious flooding, started exploring the 108 foot deep lake using sonar equipment after fishermen reported dragging up Roman artefacts in their nets at one end of the lake. This information tallies with official documentation dating back to the 15th century that one of the boats lost sunk in a different area to the others, since found.

The Mayor of Nemi, Alberto Bertucci, explained it was not known how the boats were sunk, but surmised that perhaps Caligula’s successor Emperor Claudius, had them deliberately destroyed as a reminder of Caligula’s reign, removing his belongings. They could also have just deteriorated over time left standing becoming waterlogged and rotting.
Situated approximately 20 miles from Rome, the village of Nemi is famous for its annual strawberry festivals in May and is a brilliant day trip from Rome to cool down in the summer heat or enjoy the rustic wild boar and fungi porcini in the autumn. In May during the strawberry festivals, the streets are decorated with flowers elaborately arranged in every nook and cranny possible, making a visual tribute to the wonders of natures flora grown locally.

A bit about Caligula

Caligula, born Gaius Julius Caesar Germanicus, was famous for his hedonistic lifestyle and sadistic tendencies, and enjoyed killing for fun. He ruled Rome from 37AD till 41 AD and was assassinated by conspirators who stabbed him 30 times leaving him in a similar bloodbath to the fates of so many others he savagely murdered himself.
As a small child he accompanied his father Germanicus on military campaigns to Germania, wearing a child size uniform and boots, where he was nicknamed Caligula (latin for little boots) which stuck with him for life. As well as his thirst for blood sports, debauchery and insane decision making, such as appointing his horse as a priest.

Our Ancient Rome experiences are tailor made, so if you want to hear more about Caligula, book a tour.