The Keats Shelley House in Rome

The Keats Shelley House in Rome 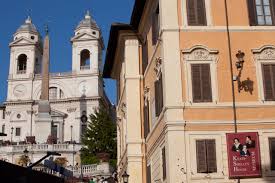 Just beside the Spanish Steps, the Baroque monument that’s on the top of your to do list, is the Keats Shelley Museum.

Blink and you will miss it, but it’s definitely worth a visit as one of Rome’s many hidden historic gems. Most tourists don’t realise that the English Romantic Poet John Keats died of tuberculosis in Rome aged 25 and is buried in the Non Catholic Cemetery for Foreigners in Rome. You will most likely have the whole museum to yourself which boasts exquisitely decorated rooms and a collection of curious artefacts, as well as a library of literature of 8000 volumes of works, in momentum to both poets and their love of the city. There is also a an informative film offering the story of both poets.

The Spanish Steps has always been an arty area popular with literary figures. Famous residents have been included John Turner, Hans Christen Anderson and Velasquez, as well as home to Rome’s top designer stores.

Admission Fee: 5 euro for adults, 4 for senior citizens and children between the ages of 6 and 18. Free for children under the age of 6.